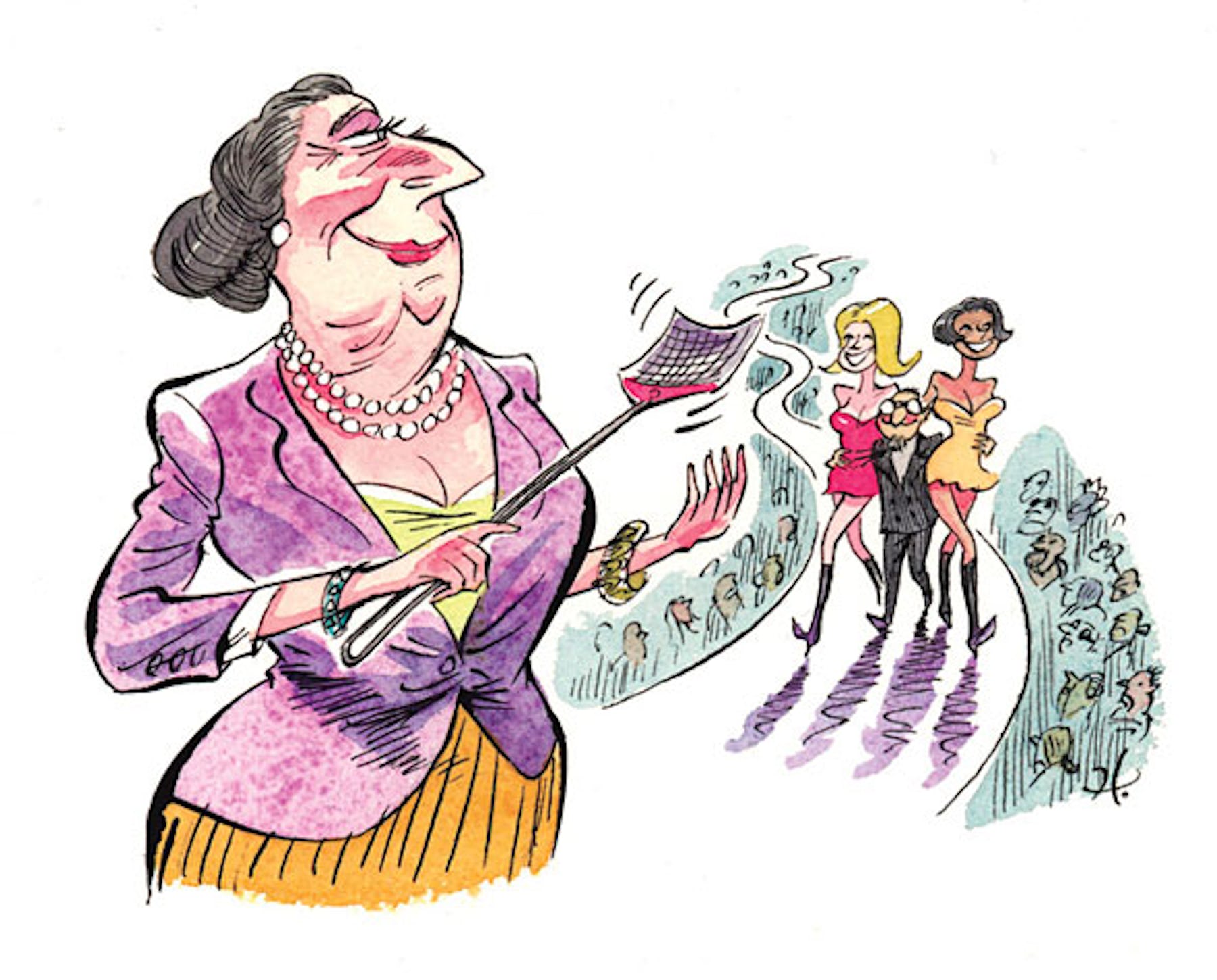 Over the years we have come to love the last editorial page of W Magazine also known as the Last Laugh of every issue. The Countess Louise J. Esterhazy writes each article. When Stefano Tonchi became the new Editor-in-Chief of W Magazine, the alter ego, Louise J. Esterhazy, of John Fairchild retired. Recent issues of W Magazine no longer feature Louise and her last laughs. Fairchild, 83, is the son of the creator of Women’s Wear Daily. Fairchild wrote about his views on society and fashion as Louise. As a tribute to Louise and her witty personality, I’ve gathered together some of my favorite quotes by the countess. These quotes are from a collection of W at the Londonberry Showroom that dates from the years 2004, 2009, and 2010. Enjoy.

One Countless, One Vote

“I’m not saying ego is a bad thing. I’ve always had a healthy dose of it..“ -Louise J. Esterhazy

“Everybody likes a little spice in life” -Louise J. Esterhazy

“First ladies are important. Can you imagine Jack without Jackie? Ronald without Nancy? Or Bill without Hillary?“ -Louise J. Esterhazy

Louise In The Real World

“What’s wrong with a little constructive criticism now and then-especially if you can answer back? I love a good fight.“ -Louise J. Esterhazy

“The street was filled with liter, and the sidewalks were packed with young, zippy people. Shorts and bright colors clearly are the rage. For a moment I thought I might become a fashion designer, because it looked like there was no fashion in New York.” -Louise J. Esterhazy

“People were carrying shopping bags from Barney’s, Prada, Bergdorf’s and other stores. Bad economy? Not in these parts.“ -Louise J. Esterhazy

“We have entered an era in which people with money continue to spend it as if tomorrow will never come.“ -Louise J. Esterhazy

“Money always speaks and the people who have it are always the Untouchables.” -Louise J. Esterhazy

“At least the vacation-not to mention the Obama’s visit to the Grand Canyon-should silence critics of their European trip, who groused that the family should have toured the landmarks of the U.S of A. instead. They have- so shut up.“ -Louise J. Esterhazy

“Luxury now has a negative connotation that indicated the over-the-top, the nou-veau riche or someone with bad taste. It’s the word bandied about by the person who throws money around with big parties, magnums of champagne at clubs just to spray on people.” -Louise J. Esterhazy

“So forget luxury. The proper word to use today is “quality”…That’s what counts and what people should look for in everything they buy, no matter the price.“ -Louise J. Esterhazy

“Brands and retailers aren’t stressing quality enough but instead are pushing style over substance, the trendy over the timeless. They need to start changing their tune.” -Louise J. Esterhazy

“Brands have desperately tried to imply they’re quality with false patches, frays, rips or aging. What they haven’t realized is that you can’t fake It.” -Louise J. Esterhazy

“Quality isn’t solely about clothes, It should be in everything and everywhere you look.“ -Louise J. Esterhazy

“I’d like to say the word “luxury” and what it stands for have become rotten apples on the tree” -Louise J. Esterhazy

“How many times have you bought a suit or a dress and actually admired the workmanship? How often have you inspected the lining of the jacket to see whether it’s sewn on correctly, or the cut of the shoulder to make sure the stripes match up? Have you turned around to look at the back of the dress to make sure it fits perfectly? You should.“ -Louise J. Esterhazy

“I can’t help but fondly recall those halcyon days of Yves Saint Laurent in what seemed a more innocent and creative era, the sixties.” -Louise J. Esterhazy

“Fashion today is like rolling craps in Vegas and even if you come up sevens, there’s no certainty of winning.“ -Louise J. Esterhazy

“What the fashion moguls should realize is that if all they’re selling is the same old same old, all that’s left is body coverings-garments with no imagination.” -Louise J. Esterhazy

Louise’s Trip to the ER

“A visit to an emergency room humbles a person and punches out all one’s self-importance. You get a glimpse of humanity that many people hide from. Here are people smilingly and energetically trying their best to make you feel better no matter your condition. What can be better than that?“ -Louise J. Esterhazy

“Then there’s that place for the power elite, the Grill Room at The Four Seasons, which is filled mainly with aging men in dark suits. Why can’t they mix in a few interesting, attractive ladies (apart from me, that is) more often? Even Barbara Walters would do.” -Louise J. Esterhazy

“My advice to the average women is that there is no reason she shouldn’t wear anything she wants, even a paper bag.“ -Louise J. Esterhazy

“Fashion is now all over the place-seductive, daring, minimal, maximal-and there is no one look anymore.” -Louise J. Esterhazy

“Today, anything goes because we all seem to be in a reality show of our own casting and are desperate for cameras to follow us. (Hey, if a woman called Snooki from New Jersey can become a TV star, there’s hope for us all…)“ -Louise J. Esterhazy

“It’s all a new reality, and the game is not to look like everyone else. Live to be daring and suffer the consequences.” -Louise J. Esterhazy

“Clothes are just accessories to a woman’s charms and a man’s appeal.“ -Louise J. Esterhazy

“Chanel informed me that there was no such thing as fashion-except hers. And even that wasn’t fashion, she added; it was simply the way people should look.” -Louise J. Esterhazy

For more on the Countess, explore W