You’d be hard put if you entered a Spanish home not to find at least one item designed by Agatha Ruiz de la Prada.

The fashion designer, who has no connection to Italian fashion label Prada, is known for her colourful and funky designs. She may have started out with clothing but her sprawling design empire now stretches from notepads to tiles, security doors and even gravestones.

Yet she started out wanting to be an artist, not a designer. The daughter of an aristocrat and an architect, Ms de la Prada was inspired by her father’s extensive contemporary art collection. She spent her childhood drawing, but eventually felt that as a profession it could be frustrating and slow. In contrast, fashion offered “immediate satisfaction”. She was drawn to it because of the teamwork involved and because she saw it as a “high energy”, “quick” environment, and her artistic flair helped to inspire the unusual designs for which she is now renowned.

Ms de la Prada secured her first job in the industry aged 19, in the midst of the cultural movement known as La Movida that emerged after the death of dictator General Franco in 1975 and saw Spain push boundaries in the arts. Ms de la Prada’s boss Pepe Rubio was a fashion designer central to La Movida, and she credits him with inspiring her. “I learned with him that you can do what you want.” 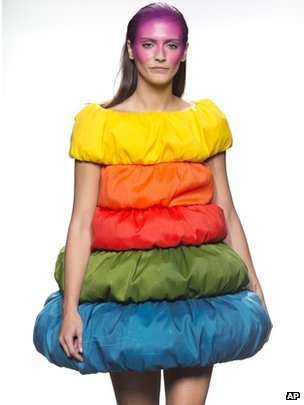 Helped by contacts she made in this first job, Ms de la Prada held her first solo fashion show in Madrid in 1981 at the height of the artistic and cultural revolution. It showcased the vibrant colors and shapes that were to become her trademark. “Color is important, and has [always] been important for me. It’s part of my personality,” she says. With such a distinctive image and through further fashion shows over the next decade she managed to achieve more and more recognition.

But she was also struggling financially, with some of the stores she sold her collections to not paying her. She realized she could not build the world famous brand she was aiming for without the backing of a big company. Her big breakthrough came when she secured a deal to design her own-label women’s clothing collection for Spanish department store chain El Corte Ingles, 11 years after her first show. The deal catapulted her from selling in small quantities to having several best-selling collections. “One year we were selling 100, the next year 500, the next year 12,000,“ she says. “It was like a miracle.”

She also branched out beyond women’s fashion, expanding her line to include men’s and children’s fashion as well as ceramics, toys, linens and towels, make-up and more. Ms de la Prada says partnering with well-known brands worked for her because it meant she did not have to invest financially, and could simply focus on the design.

She has since teamed up with partners on more than 300 collaborations, including designing a series of watches for Swiss watch company Swatch, as well as for more unusual things such as a collection of gravestones for a French show, and a range of security doors for an Italian firm. While initially her deal with El Corte Ingles accounted for 90% of her revenues, it now accounts for only 2% to 5%. She has also gradually built up a small chain of her own standalone stores.

She credits her early difficulties with getting paid by her customers for her current prudence. “It was the best lesson in my life… because it’s that which has helped me to not do silly things – for the rest of my life.“ She says the experience taught her to keep a close eye on the numbers, and says the first thing she now does each morning is look at the figures for the business. “I spend what I have, not more than I have.”

She recommends this type of slow and steady expansion to other would-be entrepreneurs, advising both patience and persistence, as well as self-belief: “Because if you don’t believe in yourself who is going to believe?”

This feature is based on an original television interview by Neil Koenig for the BBC’s Start-Up Stories series.