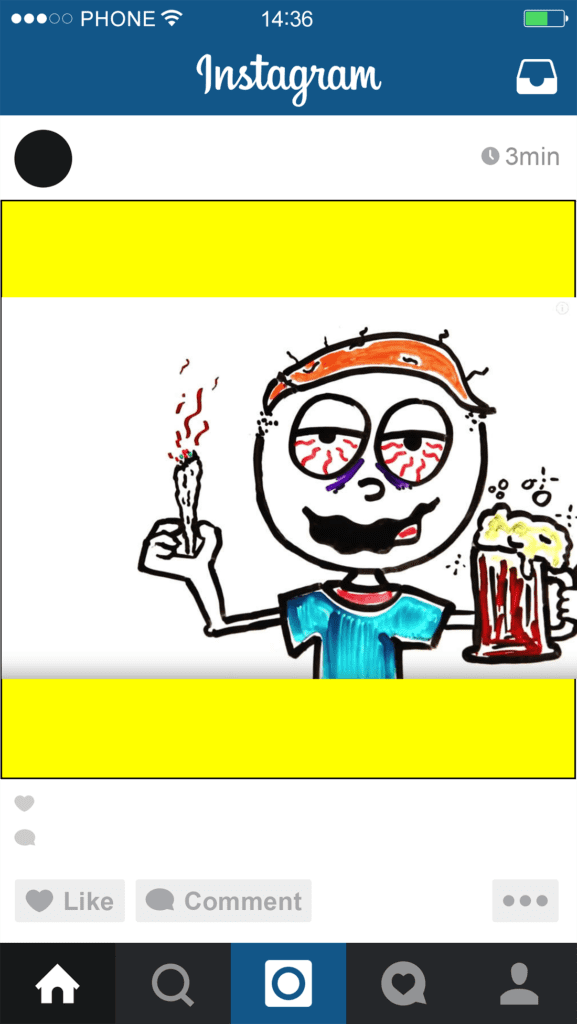 Once upon a time you could become drunk and afterward, people might gossip about your oafish escapades but it more or less stopped there, unless you broke a law. Or you got stoned and did clumsy, stupid things, but the news didn’t travel too far. Perhaps a few photographs would be shared, especially if you were a celebrity; but for the typical person, it could be hushed up and just become a “learning experience.”

Nowadays when you get drunk and disorderly, whether you are famous or an average citizen, it is easily documented on someone’s cell phone and then posted to social media sites. Your inebriated, uninhibited behavior could end up on You Tube, or Instagram, or other well-trafficked platforms.

You might not want this to happen… or you might be a willing participant, ready for your closeups amidst your screw-ups.

Instagram in particular is a highly visible source of drunk and stoned behavior. Powered by hashtags and popular pages such as Drunk People Doing Things and High People Doing Stuff, and several other accounts featuring “Drunk” or “High” or “ Stoned” in their names, you can watch numerous videos featuring people (often young) doing questionable things while drinking or lighting up.

Quite often it seems as if the subjects of these videos are well aware of their star power, no matter how fleeting it is. But at other times the videos take on a voyeuristic quality, and we are privy to cringey foibles that someone will regret, if they are even capable of remembering them later on.

One video on Drunk People Doing Things highlights the clumsy and disgusting foibles of a young, shirtless man who staggers around and drops a few chicken tenders from a tray he carries. He picks up the food pieces from the sidewalk and puts them back on his tray, and another guy rescues his fries that fell to the floor, placing them on the tray as well. We can assume from the direction of this video that Drunk Guy will indeed eat the food, thus becoming an adherent of the Five Second Rule.

While this video comes across like a wacky sketch from a comedy show, it does seem genuine. It stars an unnamed guy who is drunk and makes questionable decisions, even if they might not be life-changing. What will happen to him when days (or hours) later he is identified, laughed at, and goes viral for being a sloshed klutz? What will happen when his family and employer finds out? When he sobers up, will he feel intense shame or shrug it off… or will he feel a buzz of notoriety? Will he relish the million-plus views of his ineptitude?

Our indiscretions can easily become fodder for social media. It takes so little effort for a person to take a cell phone, press Record, and make a simple video. Save it and post it, with appropriate hashtags included, and it becomes part of The Conversation. Privacy issues be damned. We are all fair game. It’s unkind to do this, but many people have few regrets about making these videos and posting them. It has become a game, a diversion.

Why are so many people fascinated by these videos of Drunk or Stoned people?

And for what kinds of absurdities could you find yourself involved in when drunk (or sometimes when stoned), and being videotaped and going viral on social media?

There are so many ways to make a fool of yourself, and so many reasons for it. What do the experts say? Does research back up these findings? Do we dare look at Instagram in a scholarly manner?

According to a 2014 article in the New Statesman, scientists have researched how we find humor in watching people who are clumsy.

“The researchers have found that the brain interprets funny and frightening facial expressions similarly… this contradiction, or paradox, triggers a humorous response: we laugh, recognising that someone isn’t in danger but is instead just clumsy.” This condition extends itself handily to watching drunk people videos on Instagram– even if it does have an underlying cruel streak.

A Huffpost story delves into “Why do we think it’s funny to put down, hurt, or even abuse another person?”

“America’s Funniest Home Videos is full of images of people falling, crashing, making mistakes, and the resounding laughter that accompanies them.” The show’s producers know that it makes for good ratings.

“(This) makes us feel superior” and to an extent “Misery loves company”. You could also say this is, sadly, a very elemental and crude attitude of many people, and not just the young. Basic psychological and sociological observations have revealed this time and again. Classic cruelty can be dressed up with the latest technological modes.

According to a Science Daily article from 2018, “College students who binge drink are frequently posting on social media while intoxicated and show signs of social media ‘addiction,’ according to a new study.”

“During these times when young adults are feeling disinhibited by alcohol, they can be even more likely than usual to post inappropriate material without considering the future impact… further, friends who view their posts of heavy drinking may then be more likely to perceive intoxication as exciting and fun…”

The key points here are the links between heavy alcohol consumption, being young, and social media usage. In particular, “feeling disinhibited” leads to this behavior. We all know that youthful indiscretion can be harmful, and social media is so easy to use and so readily available, it’s seemingly no surprise that drunk-and-foolish videos are plentiful.

Lastly, an academic article from the National Center for Biotechnology Information found that “Alcohol posts of youth frequently depict alcohol in a positive social context… and display people holding drinks…In terms of content and processes, alcohol posts on social media are social in nature and a part of young people’s everyday social lives.  (including)…social contexts such as dinners and parties…” Alcoholic behavior, even if it is ultimately dim-witted, awkward and cringe-worthy, is viewed favorably by many people, at least in the short run. It is seen as an important aspect of certain people’s lives, and manifests itself in popular social media.

What happens when the young drinkers grow older? When they are applying for jobs? When they run for political office? When their own children watch these videos years later?

Ultimately, are we laughing AT or laughing WITH the “stars” of these drunk and stoned videos? Most of the time we may not want to delve into our motives for indulging in these videos; but when we do, the introspection might be quite painful.

So, should you “think before you drink” or say to hell with it, I want to be a social media star?