Washington D.C has the seventh best street style in the United States, according to a new study that ranks all United States and the District of Columbia against four contributing factors.The Street Style Index, published by menswear brand boohooMAN, analyzed the fashion influence, online search data from the last 12 months, social media engagement per state to determine the state with the best street style. It ranks 51 US jurisdictions based on four main pillars: number of fans per look on popular online fashion community Lookbook.nu (over 180,000 looks were analyzed); streetwear video views on TikTok; streetwear search interest via Google Trends; and style influence according to the number of Google searches for streetwear in each state it(i.e. ‘New York streetwear’, ‘New York street style’) via Ahrefs.

Washington D.C. ranks seventh best street style in the U.S. This is mostly due to Google Trends data revealing that the District of Columbia has the highest level of search interest in streetwear in the nation, beating any other state. It unfortunately didn’t grab a top ten spot for any other criteria as it has the 14th most Googled street style with 350 average monthly searches; was voted 17th best style online with 7.22 fans per look amongst 3,834 posts; and placed 29th for TikTok streetwear video views.

New York continues to hold on to its title of fashion capital of the United States, with the highest number of fans per look on Lookbook, with 28.93 fans per look based on 52,396 posts. It also has the highest levels of search interest in streetwear on Ahrefs. New York ranked second highest interest levels via Google Trends and the seventh highest number of views on Tiktok for search terms such as ‘New York streetwear’. New York has the most Googled street style in the nation, receiving 22,150 monthly average searches, almost 10 times the search volume seen compared to any other state.

New York has the highest interest level in cargo pants, a key streetwear 2022 trend, out of any other state, with California second. In September, searches for ‘cargo pants’ rose by 257% to an all-time high in New York.

Google Trends data reveals searches for ‘cargo pants’ are also at an all-time high in the United States, with an estimated 306,000 average monthly searches nationally.

Cargo pants have been such a breakout trend that searches have exploded in October 2022 by 294% to an all-time high in the United States.

Another streetwear staple, the bomber jacket, is searched an estimated 156,000 times in the United States, with New York leading the trend this winter.

Tracksuits trended at an all-time high last winter, with searches exploding in the United States by 536% in October 2021, and are expected to make another big comeback this year. New York leads the way again, of course, with the highest interest level according to Google Trends. 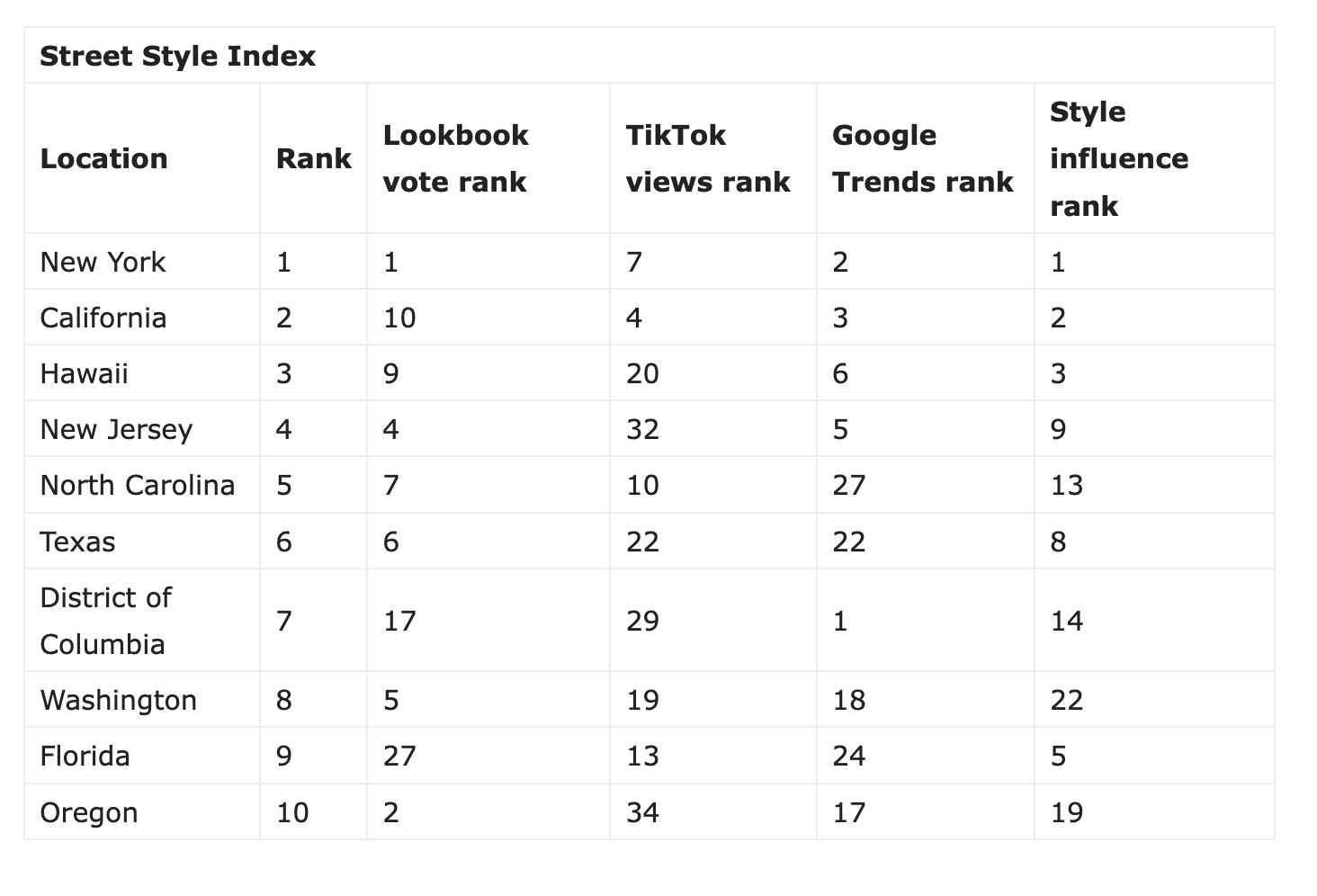 California ranks just behind New York with the second best street style. Californians have the third highest Google Trends search interest levels for streetwear-related terms. California also has the second most influential street style, ranking second most Googled in the United States with 2,230 average monthly searches. However, the Sunshine State missed out on the top spot as it was voted tenth best street style online with 13.38 fans per look between 36,346 posts.

Hawaii takes the third spot behind California and New York by ranking high among states for online search interest in streetwear via Google Trends and Ahrefs, receiving 2,150 average monthly searches. It was voted ninth best street style online ahead of California with 14.4 fans per look based on 2,578 posts. Hawaii also ranked 20th for total views on TikTok for ‘Hawaii streetwear’.

Graphic t-shirts saw a massive increase in searches this fall, soaring by 541% nationally. Hawaii was one of the top states searching for this trend online.

New Jersey ranks fourth on the Street Style Index. It was voted fourth best style online with 19.58 fans per look, behind Arkansas. New Jersey scored in the top five for highest online search interest in streetwear via Google Trends. New Jersey ranks in the top ten for most searched street style in the United States, at ninth place with 950 monthly average searches. The Garden State missed out on third place to Hawaii, as it ranked 32nd according to the number of streetwear video views on TikTok.

North Carolina has the best street style in the south, after placing fifth best overall in the United States. It scored highly amongst voters, having the seventh highest number of votes with 15.71 fans per look amongst 1,502 posts. North Carolina streetwear also received the tenth highest number of TikTok views. However, it didn’t grab a top ten spot amongst online search levels, ranking 27th for interest levels in streetwear on Google Trends and 13th most Googled street style in America with 410 monthly average searches.

Washington places eighth in the Street Style Index, earning the title for best street style in the northwest. It ranks fifth best style amongst online voters, receiving 18.08 fans per look amongst 5,325 posts. Despite this, Washington lost a top five spot due to receiving an average score for other criteria. Google data reveals the Evergreen State has the 18th highest interest in streetwear, and Washington’s style is the 22nd most Googled in the nation, receiving 350 average monthly searches. Similarly, Washington streetwear received the 19th highest number of video views on TikTok.

Florida is number nine amongst the states with the best street style. It earns its ranking due to having the fifth most Googled style, behind New York, California, Hawaii and Maryland with 1,130 average monthly searches. Florida has the 13th highest number of video views on TikTok for streetwear. The Sunshine State didn’t bag a top five spot as it received an average score for streetwear search interest on Google Trends and online votes, with 5.5 fans per look amongst 11,409 posts.

Rounding off the list at number ten is Oregon. Oregon received the second highest number of votes for its style, just behind New York and beating California for this criteria, with 26.85 fans per look amongst 1,833 posts. It missed out on being crowned best street style in the northwest to Washington State, with a below average number of TikTok video views, placing 17th for streetwear search interest on Google Trends, and having the 19th most Googled street style in America with 200 average monthly searches.

A spokesperson for boohooMAN said: “Streetwear has blown up over the last few decades, from the emergence of 90s hip hop culture, to merging with luxury in the 2010s to being referenced in almost every designer fashion show. While it’s no surprise that New York and California take the top two spots, other states like Hawaii, Oregon and New Jersey break out with high ranks on the list, with voters favoring street style from these states compared to Cali. New York was beaten by six other states on TikTok, which shows that users are focusing more on local fashion culture than just what’s going on in the Big Four fashion capitals.”

The study was conducted by menswear brand boohooMAN.