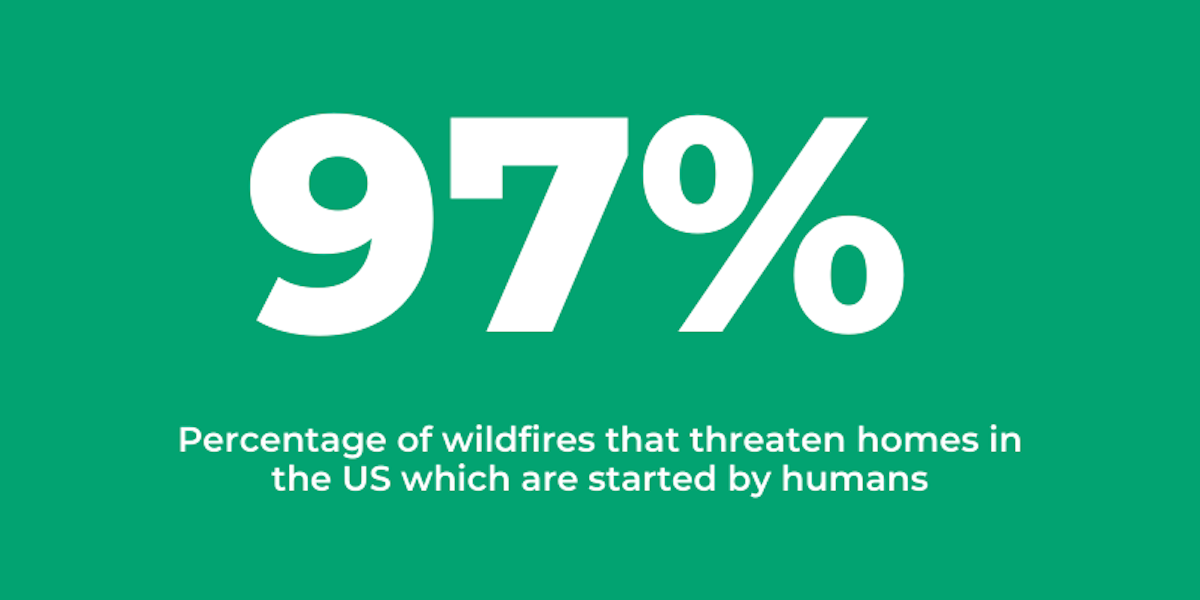 Summer and fall are wildfire season across the western U.S. In recent years, wildfires have destroyed thousands of homes, forced hundreds of thousands of people to evacuate and exposed tens of millions to harmful smoke.

Wildfires are a natural disturbance for these regions, but when combined with climate change and housing growth in the wildland-urban interface – zones where development has spread into wild areas – they have become larger and more destructive.

30,000 firefighters today are on the blazes. 94 active & big wildfires. We’re asking too much of our firefighters. Thanks @smerconish for the opportunity to share some key fire science. https://t.co/yeFvbWZBqO

To make matters worse, humans are responsible for starting almost all the wildfires in developed areas that threaten U.S. homes. In a newly published study, we show that through activities like debris burning, equipment use and arson, people ignited 97% of home-threatening wildfires in the wildland-urban interface between 1992 and 2015. For comparison, when fires in undeveloped areas are also counted, humans started 84% of all wildfires between 1992 and 2012, with lightning as the main natural cause.

Wildfires in developed areas threatened one million homes across the lower 48 states that sat within their boundaries in the years we reviewed in our study. This figure is five times larger than previous estimates, which did not consider the threat of small fires – those measuring less than 1.5 square miles (4 square kilometers).

Human-started fires in these zones carry a high price tag. Over 15 years, between 2000 and 2014, state and local governments spent US$4.1 billion fighting wildfires near homes. That’s equivalent to one-third of the national wildfire control budget, even though the wildland-urban interface represents only 10% of U.S. land area.

And development in these areas is increasing. Between 1990 and 2015, 32 million new homes were built in the wildland-urban interface – a 145% increase.

Climate change is adding to the problem by making much of the U.S. West hotter and drier, and thus more prone to burn. Warming that has already occurred is linked to a doubling of cumulative burned area across Western U.S. forests since 1984.

As warming continues, small fires started by people either accidentally or deliberately in the wildland-urban interface could grow into large fires. Longer fire seasons, increased burning and having more homes to protect pose a potentially insurmountable resource challenge.

But the fact that people start the vast majority of wildfires that threaten homes also means it is possible to remove these wildfires from the equation. The way to do this is by altering common human behaviors that introduce ignitions. Key solutions may include:

– Organizing campaigns to reduce use of fireworks and other explosives.

– Limiting use of motorized equipment for yard work and banning debris burning during hot and dry conditions.

– Conducting more planned burns in high-risk areas like the wildland-urban interface during low-fire risk times of year. This work should target areas in these zones where ignition rates and threats to homes are high. These areas should receive high priority for fuel treatments or prescribed burning as preventative measures.

Current trends suggest that people are not going to stop moving to beautiful but flammable areas. This means that more homes will be vulnerable to wildfires, and more people will be engaging in activities that could start them. We think it’s time for Smokey Bear to move to the suburbs, with a new slogan: “Only you can prevent wildfires that threaten your home.”

Previous PostThe Case of Biden Versus Trump – or How a Judge Could Decide the Presidential ElectionNext PostSARS-CoV-2 Infection Can Block Pain, Opening Up Unexpected New Possibilities for Research into Pain Relief Medication